The Mission of St Patrick’s Marist College is to lead young people in the way of Mary, to know and love God in the belief that they can all become good Christians and good citizens.


Inspired by the Gospel, we commit ourselves as disciples of Jesus, and in the spirit of Marcellin Champagnat strive to help all people grow to their full potential.

The College is a family focused on the formation of young people with strong minds and gentle hearts. Our quality teaching and learning experiences nurture and challenge each student to become an informed, thinking person who acts with the compassion of Jesus and the reflective heart of Mary in creating a more just world.

The environment in which students interact with other students, staff, parents and friends of the College is warm and friendly, yet ordered and disciplined, and where relationships are characterised by mutual respect. The partnership established when a student enrols at the College includes an engagement of parents, parish and the wider community to provide a supportive and challenging pastoral structure that promotes growth.

Like our patron St Patrick and our Good Mother, Mary, we believe in a future filled with hope, a hope that we can make real.

Interwoven “A” and “M”:
Marist Symbol – Ave Maria (Hail Mary) this highlights the place that Mary, the Mother of Jesus, has in the life of this College.

Southern Cross:
Symbolises Australia and reminds us of our love for our country and duty towards all.

Shamrock:
Represents our links with St Patrick’s at The Rocks. 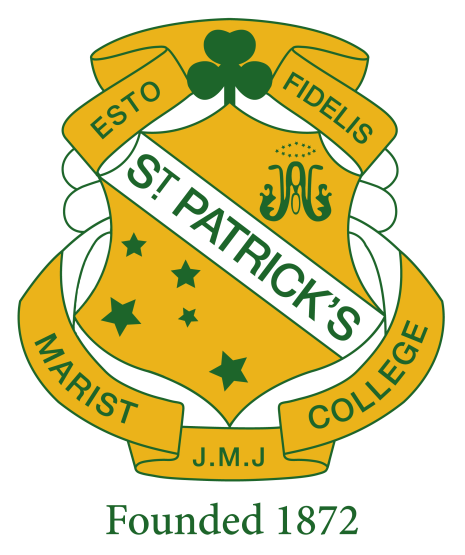 English Translation
We fly to your patronage,
O Holy Mother of God,
Despise not our prayers in our necessities,
But deliver us from all dangers,
O every glorious and blessed virgin.

St Patrick’s Marist College is a learning community in the Catholic Marist tradition and has a history reaching back to the colonial era of Australia.


Arriving in Sydney in 1872, the Marist Brothers, led by Brother Ludovic, the founder of the Marist Brothers Province in Australia, established a parish school at Church Hill, The Rocks. The mission was to educate students in the Marist way and to have them graduate with strong minds and gentle hearts.

This first St Patrick’s Marist school was a double storied building in Harrington Street, The Rocks and catered only for male students. Following the move of residents out of the city centre, the campus was moved to Dundas in 1962. This laid the foundation for the present St Patrick’s Marist College which is now proud to offer high quality coeducation that upholds the Marist beliefs and fulfils the mission of Marist schools to form ‘good Christians and good citizens’.

By 1875, Brother Ludovic was also able to open a High School at St Patrick’s. This was to be the first popular high school for day boys in NSW since the only secondary schools available at the time were boarding schools.

From these beginnings, the Marist Brothers contributed to and established a presence in many other areas of Australia whilst maintaining a school for boys at St Patrick’s, Harrington Street.

A move to Dundas

Over the years, St Patrick’s, Church Hill served as a Primary School, High School, Intermediate School, Business College and Evening College. With diminishing numbers of residents in the inner city, it was decided to move the campus to Dundas in 1962. The new site retained much of the old St Patrick’s, thus forging a strong link with the original school at Harrington Street. A number of students also made the move from Harrington Street to Dundas.

Heritage and tradition were preserved at Dundas by retaining the original School Crest. This carries the symbols of Marian devotion in the intertwined initials 'A' 'M', representing Ave Maria and is the centrepiece of the Marist Brothers’ 'Coat of Arms'. The Southern Cross places the College in the Australian context and the motto Esto Fidelis, 'Be Faithful', upholds the virtue of faithfulness in all aspects of life.

Just as the first St Patrick’s pioneered and was the prototype of Catholic secondary schools for boys, the Marist Brothers vision for the Dundas site was initially to establish a junior school from Years 4 to 6 which was to progressively become a secondary school. When completed, it was to incorporate the most modern equipment and function as a demonstration and training school for the novice teachers from the nearby Marist Scholasticate.

The founding Principal on the Dundas site was Brother Thomas More Davidson. He faced the challenges of setting up the new school with great faith and energy. Despite problems such as bad weather holding up the completion of buildings, 110 boys in Years 4, 5 and 6 commenced classes for Term 1, 1962 in the top floor rooms whilst the builders completed the ground floor. The school was established as a Demonstration Secondary School in 1965 and was named St Patrick’s Marist Brothers’ Demonstration School. The secondary school, catering for boys in Years 7-10 was officially opened on 2nd October, 1966. The primary school continued at Dundas until 1985 when the last Year 6 class completed their schooling.

1985 marked another historic year for St Patrick’s Marist when not only were its first Year 11 students enrolled, but co-education was introduced in the senior school.

The successful transition was built upon the vision and dedication of Principals' Brother John O’Brien, Brother William Selden and Brother Ronald Blyth, who guided St Patrick’s through years of change in response to the needs of the Catholic communities of Dundas and its neighbouring parishes.

The school was renamed St Patrick’s Marist College by Brother Michael Procajlo, when the first co-educational group was enrolled in Year 7 in 1992. These students are the latest to have contributed to the history of the College, 'a grand old school' in the Marist tradition and will, like so many before them, strive always to remember their motto, 'Esto Fidelis'.

Many changes have taken place since 1872, but the College has valued and preserved the Marist traditions and heritage, which are still associated with the name St Patrick’s.

The Canonisation of Marcellin Champagnat

1999 was one of the most remarkable years in the history of the College, as Marist communities across the world joined together to celebrate the canonisation of Marcellin Champagnat in Rome on April 18th. The canonisation of Marcellin Champagnat is both an affirmation by the Church of our Marist way and a challenge for us to continue to develop it in the life of our College.

The extraordinary influence of this young French priest and founder of Marist Education is just as evident today as it was in 1817. At the beginning of this new millennium, the courage, spirit, dedication and integrity of Saint Marcellin Champagnat continues to inspire and shape the dynamic growth of St Patrick’s Marist College.

Learn more below about the history of our school's leadership over the years.

The following is a list of College Principals since the school transferred from The Rocks in 1962 to its current location at Dundas.